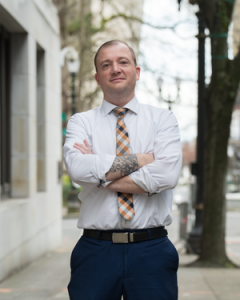 As the May 19th primary fast approaches, one of the widest races on the ballot is that for Multnomah County Circuit Court Judge Position 12. Interestingly, the Circuit Court has not seen a competitive race for 12 years, as typically judges are appointed when another resigns, and are rarely challenged on the ballot.

KBOO's Althea Billings spoke with candidate John Schlosser, who has been a criminal defense attorney for over 10 years with a focus on protecting immigrants and their families, as well as being a board member of Pueblo Unido, a local organization that advocates for the rights of immigrants.

More information on Schlosser and his campaign available at votejohnforjudge.com.

Update Required To play the media you will need to either update your browser to a recent version or update your Flash plugin.
Download audio file
Topic tags:
Government/Politics, Law/Court/Crime, Immigration