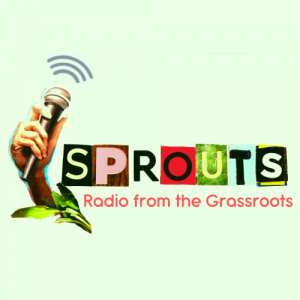 Sprouts: Radio From the Grassroots is a radio program that celebrates community stories. Coordinated by Pacifica Radio’s Affiliate Network, “Sprouts” showcases audio production at community radio stations and independent production groups from around the world. It is renowned for its diverse local voices, brought to a global media platform.

“Sprouts” is offered free of charge to all radio stations. It holds a regular slot on approximately 50 radio stations’ program schedules and is also often cherry-picked by more than the same number of stations. The program is 29 minutes in length and is produced at a different location every week, hosted by the local radio producers, with assistance from Pacifica Radio staff who provide Sprouts Production Instructions, including the introduction and closing script and music, as well as assistance, if needed. Topics vary from mini-documentaries, to in-depth interviews, to breaking events and issues of importance. Hyper-local stories of global interest are shared.

Pacifica’s Affiliate Network is a family of more than 200 independent and collaborative community, college, Internet, and Low Powered stations in the United States, Canada, and Europe. Pacifica Radio owns five radio station in New York, Los Angeles, Berkeley, Houston, and Washington DC. It has pioneered the field of public, community, and independent radio since 1949, with the mission to further peace and understanding by broadcasting the uncensored voices of artists and journalists.

Contributing a production to Sprouts is an excellent way to bring a worthwhile production piece to a wider audience and to let people know about great production and reporting in grassroots radio.

Episodes of Sprouts can be heard on SoundCloud. 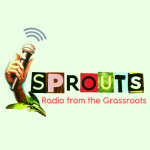 Airs at: Fri, 11/11/2022 at 11:00am - 12:00pm
Produced for:  Sprouts
Update Required To play the media you will need to either update your browser to a recent version or update your Flash plugin.
Download audio file
1st half: Elena Terry is the Executive Chef/Founder of Wild Bearies, a non-profit community outreach catering organization that supports participants to overcome alcohol and other drug abuse issues or emotional traumas. One of her goals has been to develop mentorship pro... END_OF_DOCUMENT_TOKEN_TO_BE_REPLACED