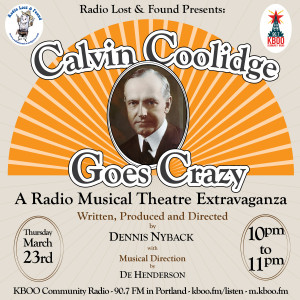 My return to KBOO airwaves after a long absence.

This week, we bring you a encore presentation of the live-on-the-air radio musical play Calvin Coolidge Goes Crazy, by our recently departed friend Dennis Nyback:

On August 2, 1927 President Calvin Coolidge hosted a press conference where he handed out slips of paper to the press that said "I do not choose to run for president in 1928." He then added "There will be nothing more from this office today." When Calvin hears a Bix Beiderbecke record he is struck by the beauty of it and he goes jazz crazy...a musical about clandestine love, speakeasys, gangsters, and the White House. By Dennis Nyebeck, with songs from the era by Jerome Kern, Rodgers and Hart, Fats Waller, Cole Porter, Rube Bloom and Jack Yellen.

This was broadcast live on KBOO airwaves on Radio Lost and Found on March 23rd, 2017.

Dennis was a great pal and a Portland treasure.

I hope you enjoy this encore presentation.

Locus Focus
The River That Runs Through Portland